Like its namesake, The Unicorn Murders is an unusual beast.  Part spy caper, part impossible crime, it’s a unique entry in the Carr library.

The story revolves around a duel between a master thief and a master detective.  The thief publicly boasts of his intentions to steal a mysterious object, referred to as “The Unicorn”, during a flight to Paris.  The detective, in turn, issues a public exclamation that he will be onboard the flight as well, with the intent to capture the thief.  Both hero and villain are masters of disguise and nobody knows what they look like.

Not your standard Carr set up, am I right….?  The whole premise of a super villain playing cat and mouse with his nemesis feels somewhat cardboard and out dated, although I suspect that this is Carr’s homage to The Mystery of the Yellow Room.

The action unfolds from the perspective of an ex-intelligence man vacationing in Paris.  Through an attempt to impress an old love interest, he gets swept up in the plot to protect The Unicorn and capture the master thief.  The first third of the book is fairly action-packed for a Carr story, featuring car chases, fist fights, and a downed airplane.  The author moves the plot along well enough to keep you interested, although this is a bit of a deviation from his usual element.  I found myself wondering how an impossible crime was going to come into play and how long it was going to be until we got there.

Fortunately, The Unicorn Murders is kind of two books in one.  We eventually end up with a group of about a dozen people (including Merrivale) stranded at a chateau surrounded by a flooding river.  We know that the thief and detective are among the occupants, but which ones are they?  It is in this setting that Carr finally kicks into gear and unleashes an excellent puzzle.  A man, standing in plain view of two witnesses, clutches his head and cries out in agony before collapsing.  The cause of death – a large hole, several inches deep, bored into his skull.  A gun can be ruled out, as there is no exit wound or bullet.  The victim couldn’t have been stabbed, as the witnesses would have seen a weapon such as a spear or knife being thrown.  To top it off, every conceivable escape route for a possible killer was being watched by multiple people.

Finally we get Carr in his element, and he plays the plot with expert precision.  From the moment the murder happens, the book careens out of control towards an uncertain conclusion.  Without me giving anything away, the plot bypasses a traditional investigation – in its place providing a bit of a thriller imbued with a real sense of peril.

Those familiar with the famous “99 Novels for a Locked Room Library” list may be aware that The Unicorn Murders is one of the 15 Carr novels included.  This is a bit puzzling because it is in no way a locked room mystery – there is no room to be locked.  However, it is a killer impossible crime.  The murder occurs in an open hallway, but the presence of eye witnesses and the bizarre nature of the death left me struggling for an explanation……and I actually found one this time!

Yes, this is the one time where I’ve truly figured it out (well, I kind of had an idea of the overall technique behind Till Death Do Us Part).  The murder weapon was immediately apparent to me, and I suspect it will be for many.  The question, though, was how the murder could be pulled off in such vexing circumstances.  I made a leap in reasoning, and suddenly the answer seemed completely obvious.  Despite this, I thoroughly enjoyed the rest of the story.  This is, I suspect, due to the fact that you can never really figure out a Carr twist completely.  You may ascertain the general notion of “the how”, but it is impossible to see all of the tiny details that make everything come together.  In my case, even though I figured out the how, I didn’t know the who – a fact that may be particularly humorous if you’ve read the book.

A truly great impossible crime isn’t just about the puzzling nature of the impossibility.  You have to factor in the the solution and whether it ultimately satisfies.  Some stories contain overly intricate mechanisms that would benefit from a diagram.  Others, like The White Priory Murders, provide a solution that is so elegant in its simplicity that it boggles you that there was ever a mystery in the first place.  The Unicorn Murders falls in the later camp, with a solution that I can only call brazen.

As for the book as a whole – I could take or leave the whole spy caper aspect of it.  I’m happy to see Carr taking a variety of approaches with his story telling and he is skilled at creating a sense of adventure (see also Fire, Burn and The Nine Wrong Answers).  It is the last 2/3 of the book though that truly stands out, providing what you would hope for in a strong 1930’s era Merrivale mystery.

My copy of the book contains a floor plan of the crime scene, which is always a welcome inclusion (sure would have liked one for Death Watch…).  However, the page with the floor plan was positioned several pages before the actual crime occurred, which is unfortunate since the diagram clearly gives away who the victim is going to be.

Early in the book, Merrivale exclaims “Archons of Athens” – a saying attributed to Fell, not Merrivale.  I temporarily questioned whether the book had been intended as a Fell tale, and Carr had just missed a detail while scrubbing the story.  This seems extremely unlikely, as the circumstances of Merrivale’s involvement in the story are heavily reliant on his government position.

40 thoughts on “The Unicorn Murders” 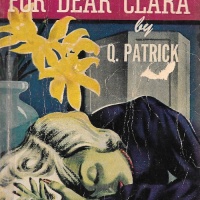