For now we see through a glass, darkly; but then face to face 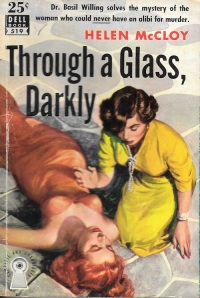 I first became aware of this title via Ed Hoch’s 1981 compilation of top impossible crime novels.  Sharing a spot alongside works like The Judas Window, Rim of the Pit, and Death From a Top Hat seems to speak volumes for a book.  Of course, that can be quite a reputation to live up to as well.

Through a Glass, Darkly is my first experience with Helen McCloy, although she’s on my radar for other much lauded titles such as A Cue for Murder and Mr Splitfoot.  This is the eight book with her series character Dr Basil Willing – a psychiatrist, not a detective.  Many reviewers consider it to be her masterpiece, although I’ve read a number of other reviews that consider several of her other works to be superior.

The story focuses on the tragic figure of Faustina Crayle, forever hounded by a seeming conspiracy that she doesn’t understand.  As the book opens, Faustina is losing her second teaching job in two years.  The students and staff at her boarding school in Connecticut are terrified of her, which is surprising given her mild manner.  The reason for their terror doesn’t become apparent for quite a few chapters, and so if you haven’t read this book yet, you might consider skipping this review (and others) and going in blind, because that aspect was fun for me.

Still here?  Ok, well, it’s not like it’s some super twist that you shouldn’t know about, but I was enchanted by those early chapters where I was trying to figure out what might be going on.

The students at Faustina’s school are afraid of her because she has the ability to project a double.  On multiple occasions, she’s been observed by multiple witnesses to suddenly slow her movements into a trance like state.  At the exact same moment, other witnesses report seeing her in places where she couldn’t possibly be, such as the other side of the school campus.

It’s this notion of a projected double that pushes Through a Glass, Darkly into impossible crime territory.  I have to admit, it’s an impossible premise that doesn’t really capture my imagination.  The immediate conclusions that I couldn’t help but jump to were that either someone is doing a clever impersonation, or Faustina has an unknown twin.  I mean, come on, what else could it be?  But, of course, with this being such a highly praised book, I knew there had to be something more to it.

The story jumps back and forth between the boarding school in Connecticut and New York City, where Dr Basil Willing lives and Faustina has recently relocated.  Willing’s involvement in the mystery is a bit nonsensical.  His girlfriend was a coworker of Faustina, and writes him a letter offhandedly mentioning that Faustina was acting a bit odd and had borrowed a memoir of Goethe.  This scrap of information is apparently enough to cause Willing to drop all of his work for several weeks and instead invest all of his time traveling around investigating what could be amiss.

There’s a murder that occurs roughly midway through, but it’s by no means what you might think of as being an impossibility.  A teacher at the boarding school appears to have tripped down a flight of stairs, but one witness reports that it was Faustina who pushed her.  This contradicts the fact that we know Faustina is in New York City and was on the phone with another person at the time.  This puts us in the situation where we naturally have to question if Faustina has an unbreakable alibi or whether someone is impersonating Faustina. 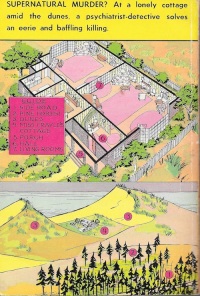 My Dell Mapback (the cover of which I love) is interesting because it features a map of a house on the New Jersey seaside that doesn’t play into the plot until the very final chapters of the book.  A very interesting scene plays out at the house, which may factor in to why the book is so well regarded, but it transpires far too late in the story for me to go into any detail.  I get why Dell chose this particular setting for the illustration, but it did seem a bit strange that it does’t factor into the story until the very end.

Overall I liked McCloy’s style of writing and the story moved at a fine pace.  The character of Faustina Crayle was reminiscent of Fey Seton from John Dickson Carr’s He Who Whispers, and the tragic aspects of the story will definitely linger with me.

I can’t say that I really think Through the Past, Darkly quite belongs on a list of top impossible crimes.  It was certainly intriguing, but I’d say most Carr books that I’ve read are more worthy of a spot.  Perhaps the main weakness for me was that, as stated above, a doppelgänger doesn’t really capture my imagination in the same way as other impossibilities.

There is actually a nice twist to one aspect of the solution that reminded me of a John Dickson Carr trick (not relating to doubles) from a Merrivale book, although I fear we can’t discuss it as it could cause a two-way spoiler.

I have two more McCloy books on my shelf, and although Through a Glass, Darkly wasn’t quite the masterpiece I had hoped for, I’m certainly looking forward to reading them. 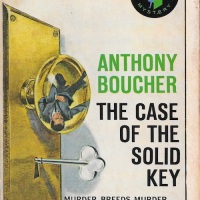 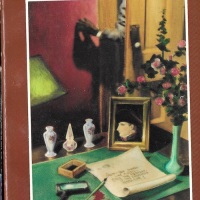