John Dickson Carr has some books where the title alone draws you in – The Nine Wrong Answers, The Reader is Warned, The Four False Weapons,…  The names suggest that the reader is going to be played with – presented with a set of clues that promise to be false.  Amongst these ranks, we find The Case of the Constant Suicides.  The title suggests deaths – multiple of them – and they’re going to look like suicide.  But this is Carr, so we know it’s not going to be that easy.

This is a classic that I’ve been holding onto for a while.  For one, I simply had to get a copy with the best cover.  Second, this is one of the handful of Carr works that I have left that are unanimously considered among his top works.  I’ve come to learn that I enjoy Carr in general, even if I’m not dealing with the more popular works, but I’ve also come to appreciate that with many of those revered stories, everything just snaps into place.

This is one of those.  Everything is just perfect – the story, the pace, the humor, the mystery, the depth of character.  The best analogy that I can make is Till Death Do Us Part.  Maybe He Who Whispers, The Crooked Hinge, or The Burning Court.  These are all Carr works where I was acutely aware that I was reading something different than the rest of the catalogue, purely in the way that all of the dimensions of his story telling come together.

In the interest of those who haven’t read this, let me start with the impossible crime.  A castle in Scotland features a high tower, with the only way up being a spiraling staircase.  In the top room, a man goes to bed behind a locked door, and is found in the morning – dead from a fall – at the base of the tower.  Upon inspection, the only possible conclusion is suicide.  The room was completely locked, there are no hidden entrances, and the tower can’t be scaled even by a skilled steeplejack.  Ah, but there is money on the line, as a substantial life insurance policy had been taken out just weeks earlier.

Well, that’s the first impossible crime.  In The Case of the Constant Suicides, there are multiple “suicides”, and each one thoroughly classifies as a locked room.  This is pretty exceptional for Carr.  I’d say about half of the books that I’ve read by him feature a second murder, but in almost all cases, the second death is just a witness getting bumped off in a fairly straight forward manner.  You don’t know who the killer is, but the mystery never verges on impossibility.  Looking back at the books I’ve read, I think only The Burning Court features two strong impossibilities.  The Reader is Warned and The Man Who Could Not Shudder certainly have some “how did it happen?” aspects to their secondary crimes, but I wouldn’t classify them as impossibilities.  Of course, I know about The Hollow Man, but I haven’t read that yet.

So here I sit, very happy with The Case of the Constant Suicides, because it beats the count in The Burning Court, and the impossibilities are quite interesting.  I won’t go beyond detailing the first “hook” impossibility, as part of the fun is stumbling upon these additional puzzles.

Now, I can’t talk about The Case of the Constant Suicides without talking about the humor.  From that perspective, this has to be Carr’s masterpiece.  Pure, simple situational humor.  No vaudevillesque slipping on a banana peel (The House in Goblin Woods), no crashing an out of control motorized wheelchair into a bar (She Died a Lady).  Here, Carr provides us with more subtle humor purely out the the uncomfortable nature of the situations that the characters find themselves in.  I won’t explain the source of the comedy, as the surprise is part of the fun of reading the book, but I was definitely laughing out loud and squirming.

The pace of the book is excellent.  I have a hard time gauging the relative length of Carr novels, as I have versions from so many different publishers, and you can’t rely on page count alone.  As with Till Death Do Us Part and The Emperor’s Snuff Box, I blazed through this book, being shocked in the end that it was already over.  Maybe these are really just shorter stories, but I get the sense that in his best works, Carr pulls all of the right elements together to create a story that you just can’t put down.

It’s easy to see why this book is so popular, and why some even recommend it as a first Carr.  You get a variety of locked room situations and solutions.  You get nicely fleshed out characters and a solid representation of Fell as one of Carr’s series detectives.  And then you get those intangibles that don’t make their way into all of the author’s works – the pace, the tightness, the humor.

24 thoughts on “The Case of the Constant Suicides” 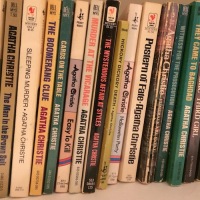