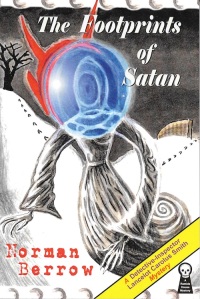 Uh, so how come everyone isn’t constantly going on and on about how amazing this book is?  How is the title not thrown down alongside the likes of Rim of the Pit, Nine Times Nine, The Hollow Man, or any of those other regulars when discussing top impossible crimes?  Why was I not forced, at gunpoint or otherwise, years ago to read The Footprints of Satan?

I walked into this one pretty sure that I was going to like it based on the few reviews that I’ve seen.  And yet, Norman Berrow seems to be one of those obscure authors – the likes of Rupert Penny or Virgil Markham – and I have a distinct impression that not everyone likes his stuff.  That would be crazy though, as from the opening pages Berrow provides a warm embrace with the tale of Londoner Gregory Cushing visiting his quirky uncle Jake Popwell in the small town of Winchingham.  It’s evident from the start that this isn’t going to be some stodgy mystery – Berrow can clearly handle characters and humor as well as his better known peers.

It’s the mystery though where The Footprints of Satan separates itself.  A deep snow blankets the town, and Cushing is astonished in the morning to find a peculiar set of track leading up the hill towards the local pub.  The tracks appear to be those of a donkey or other such animal, but they’re remarkable in that each hoof is placed directly one in front of the other.  Stranger still, the prints start in the middle of a stretch of pristine white snow.

Cushing and his neighbors follow the trail, and are bewildered as they watch the tracks defy physics; crossing fragile hedges, jumping on top of six foot walls, and passing through buildings uninterrupted.  The tracks finally arrive at a house, leaping several stories to circle the roof, and then back down once more.  The trail ends at the foot of an old tree where centuries ago a witch known as The Blue Woman was hanged.  Only now, there’s a fresh body hanging in her place.

It’s a classic scene, from the moment the tracks are first spotted up until the body is found.  It plays out over several chapters and Berrow milks it for all that it’s worth.  This isn’t some mere throwing down of an impossible gauntlet; it’s forging the steel, banging out the parts, and slapping the damn contraption together before slinging it directly in the reader’s face.  Reading along, you’ll experience the growing astonishment as the group follows the tracks and uncovers one beguiling puzzle after another. 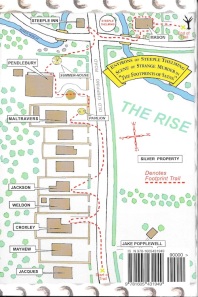 How did the tracks start and end in fields of untouched snow?  Why did the tracks walk up to the doors of several houses along the way?  How/why did it leap stories and stand on window ledges?  The questions go on and on, and I’m not even listing a fraction of them as the discovery is just that much fun.

Of course, I had some theories, and in retrospect they may seem a bit cracked out.  The fact that Ramble House included a map on the back of their 2005 reprint just added fuel to that fire.  The map does an exceptional job of matching the story, and I found myself flipping the book over constantly during my reading.

Yeah, the set up of the impossibility – nay, impossibilities – is fantastic, but so is what Berrow does next.  He spends the entire rest of the novel dissecting all of the various puzzles.  This is what I want in an impossible crime.  To often, a perplexing set up is marveled over for a page or two and then set aside as the story moves on.  In this case, the unraveling of the “how” is the story.

Now, that’s not quite as one dimensional as it might sound.  We’ve a cast of characters, including series detective Lancelot Carolus Smith (a dreadful name that’s mercifully shortened to just “Smith” most of the time), on hand to pick the puzzle apart, and it’s done with enough levity to keep things fun.

If there’s a weakness here, it’s that too much time is spent conjecturing about supernatural agents.  I mean, I hope I’m not spoiling anything for you, but this being a mystery novel, it isn’t exactly surprising that there’s a human agent behind it all.  I can accept that the characters might not glom onto that for a bit, but as a reader you don’t exactly need sixty pages of characters puzzling over ghosts.  It’s comical that once it enters the mind of detective Smith that a person might actually be involved, he solves the case within seconds.  That was a bit frustrating given that I’d just spent 100 pages pulling mental gymnastics thinking through how the trick could have been pulled off.

Oh, and man, the solution to it all is a doozy.  The moment you realize the trick (and you’ll get there at just about the same time as the investigators) you’ll feel like an idiot.  And it doesn’t stop there.  Berrow pulls one rabbit from the hat after another.  Each time you think you have it all figured out, another aspect of the solution is unveiled that hits you with the revelation that you didn’t even know you hadn’t worked out all of the details yet.  I mean, I’m sitting there reveling in the glory of the solution, and then Berrow pulls this coup de grace that makes me realize I didn’t really even have it solved yet.

It’s a masterpiece of a solution.  Berrow doles it out as a series of revelations for the reader, rather than simply telling you what happened.  There’s a brilliantly simple trick at the heart of it, clothed in enough misdirection and layers to where I can’t imagine anyone figuring it all out; which is funny, because most readers must have a gut instinct for the generalities of what has to have happened.  I myself figured out the guilty party, but didn’t have the fortitude to ride it out to a full explanation.  And man, in retrospect, there’s something that I really should have known better than to… well, if you’ve read this, maybe you know what I mean.

So, consider me a convert.  The Footprints of Satan is that type of experience where I’ll seek out the rest of Berrow’s work and gladly read ten duds, always looking to capture an essence of this book.  Fortunately Christmas is just around the corner and I’ve stocked Santa’s list with a few more titles.

Speaking of Christmas, this wasn’t intended as a holiday read.  I was excited to read this the moment I got it, and the fact that two feet of snow got dumped on me in less than 24 hours just made this the natural book to pick up next.

A word of warning – a passage somewhat early in the book seems to give away a clue to the identity of the culprit of The Bishop’s Sword.  I’m hoping that I can flush that detail from my mind, but have a feeling it’s going to stick.  Anyway, you’ve been warned. 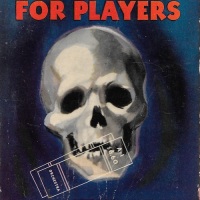 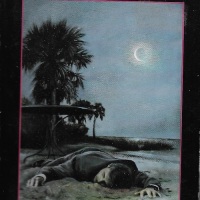