It’s been about two and a half years since I read Death’s Old Sweet Song by Jonathan Stagge.  Since that time I’ve read four novels by the writing collective most commonly known as Patrick Quentin, with the result being somewhat of a mixed bag.  Each book had its own moments in the sun, but I’d only enthusiastically recommend Death and The Maiden and Cottage Sinister.  It’s those two books though that have driven a hunger to find similarly satisfying reads by the authors.  It’s a difficult hunger to satisfy though, as aside from the Peter Duluth series published under the name of Patrick Quentin, you’re pretty lucky to pay less than $80 a book for any of the rest of the library.

So count me lucky that I managed to find a cheap copy of Death, My Darling Daughters.  It was published the year before Death’s Old Sweet Song, which puts it late in the run of nine Dr Westlake mysteries released under the name of Jonathan Stagge between 1936 and 1949.

We find ourselves back in Kenmore, Massachusetts; the type of bucolic small town that’s always a pleasant break from the usual US golden age settings of NYC and Los Angeles.  The Hilton family, esteemed descendants of a former Vice President of the United States, have returned to Kenmore after decades abroad, and the town is buzzing with excitement.  Amateur sleuth Dr Westlake performs a house call on the Hilton’s ailing nanny and befriends the family enough that he has a flimsy excuse to hang around once the bodies start dropping.  The first to drop is the nanny, killed by a seemingly accidental cyanide poisoning caused by silver polish on a tea kettle.

More characters die, and I have a feeling that most reviews will headline the second death.  Honestly though, it takes place two thirds of the way through the book, and in vanilla enough circumstances that if I laid it out, what more would you have to look forward to?  You see, there’s no real headline about Death, My Darling Daughters.  The mystery really boils down to a few poisonings that any of the dozen or so characters could have committed.  No murder has anything especially interesting about it, and no suspect ever has that much of an alibi.  Come the end, someone will be identified as the killer and we’ll all go on with our lives.

That doesn’t make the book bad though.  It’s a readable story with some stand apart bits – much more sexuality than I would have thought existed in mainstream literature in the 1940’s, and one somewhat memorable character – and the overall vibe is one I’d read again.  There are some insufferable parts though; a Scottish, an Austrian, and a southern US character are rendered phonetically, and in each case it is multiple excruciating pages of dialogue painfully relevant to the story.  I’ve trudged through my fair share of southern accents, but never seen anything as lazy as just sticking random w’s into words.

Come the end of the story there’s a fake that any mystery reader should immediately see through, although the authors provide a fine slap my forehead moment when it comes to the specific detail that allows Dr Westlake to see through it beyond just intuition.  And that’s really it.  As a golden age mystery enthusiast, I doubt there’s anything for you here other than a semi-cozy New England read.  Nothing especially clever about the crimes, nothing especially clever about the solution.

The book’s title comes from the Hilton’s family’s strict upbringing of their assorted daughters, and there’s definitely an awkward flirtation between the teenage daughters and Dr Westlake, who is in his forties.  What else of note?  Oh yeah, apparently you can kill someone by tricking them into eating ground glass, although I can’t imagine how one wouldn’t notice the grit while chewing.

Anyway, this goes toward the bottom of the Patrick Quentin pile, even though it’s a smooth read.  Still, the urge to explore the author collective remains strong for some inexplicable reason.  Maybe because they’re kind of hard to collect and yet just on the cusp of obtainability.

I ended up with my first Mercury Publication Bestseller Mystery.  I’ve seen a ton of these online, including titles by authors such as Agatha Christie.  I didn’t realize the format that I was getting: these are dual column pages, meaning that any given page contains two slightly thin columns of text.  I’m going to guess that this decreases the page count by a third, and it leads to this weird experience where you’re twenty pages into the book but it feels like you’ve read a lot more than that.  Kind of the opposite of one of those large print books. 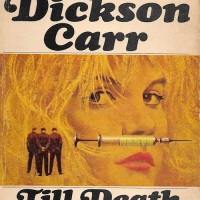 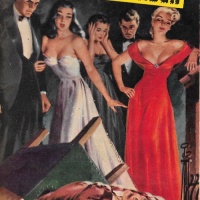 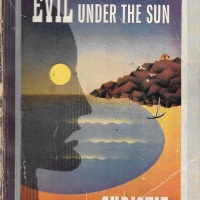