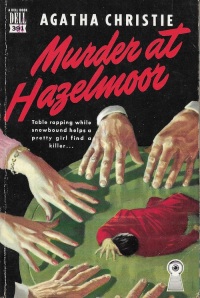 I’ve been in desperate need of a British mystery.  There’s just something about a Golden Age story set in England that checks all of the boxes.  Yeah, you can have an exceptional mystery set elsewhere, but it’s that combination of British setting and the accompanying mid-century mannerisms that take me to a certain place.  I realize that this view may not resonate with my friends on the other side of the pond, but there’s something that a British mystery stirs in me that will never be captured by their American brethren, whether set on the streets of NYC, or in the bucolic hills of New England.

I’ve been reading some solid stories lately, but with all being set in the US, I’ve hungered for a British read.  I even have this whole stack of “I need to read this next!!!” books, that for some reason are all bound to The States.  I really want to read them, but first…

So, I just received my copy of Murder at Hazelmoor in the mail, and really, I had no plans to read it any time soon.  But I take it out of the package and give it a once over.  British mystery?  Check.  Plot apparently involving a seance?  Check.  Gorgeous cover?  Check.  Dell map back?  Yep, and here we go.

I came into this book knowing nothing.  There’s a set of Agatha Christie novels that just aren’t on my radar.  I mean, just how many books did she publish?  As someone having read less than 1/4 of them, you can forgive me if the ones with the less memorable names somewhat escape me.  The Secret of Chimneys, Peril at End House, At Bertram’s Hotel, Murder at Hazelmoor – for some reason, it’s the fictional-location specific names that my attention skips over.  That made it fun to approach this one with no pre-conceived notions.

Murder at Hazelmoor is one of Christie’s stand alone mysteries lacking any of her series detectives.  It kicks off with six villagers gathered together at Sittaford House for a bit of table rapping – a seance-style party game in which participants lay their hands on a table and interpret subtle knocks as messages from the great beyond.  The message received at this party is a declaration of murder: six miles away, Captain Trevelyan lies dead, his head bashed in.

It’s a fine opening, and sets up the delicious question of which of the six table rappers revealed the murder and why.  Oddly, it’s a question that is almost completely ignored by the book, earning a mere two mentions in as many hundreds of pages.  Instead the story shifts to the nearby town of Exhampton where the murder occurred, and we get a series of investigations that feel like they’re going in all the wrong directions.

Who the investigators are is an interesting part though.  There isn’t really a central detective, and reminiscent of John Dickson Carr’s Poison in Jest, there’s the question of who will ultimately solve the case.  Among these investigators is Emily Trefusis, a lively spark who may well be one of Christie’s most memorable characters.

The middle 180 pages are… fine – Christie provides her typical set of interviews that are as enjoyable as any other of her work – but it’s a mystery that feels as if it lacks potential for any earth shattering twist.  I mean, it’s not like a good mystery should telegraph its twists, but do you ever read one where it seems like the solution is constrained within certain boundaries?  That can suck the imagination out of the read, regardless of how enjoyable the journey is.

There are definitely a number of revelations along the way, but most are ones that readers will suspect in advance.  I had to stretch my read of Murder at Hazelmoor between two weekends, and I’ll admit that the book didn’t even enter my mind in the days between.

Which is of course funny, because Christie does indeed deliver her twist, and in my mind it’s a whopper.  It blew me away, which is especially strange considering that I solved it.

Now, to be clear, I truly never want to solve a mystery – it ruins the satisfaction of the denouement, which is the end game quest that all readers are on.  In the case of Christie, I’ve solved quite a few of her books, often by spotting key clues early on or by suspecting plot twists that have become common place in the decades since her writing.  There’s no satisfaction in that.  But with Murder at Hazelmoor, I actually solved the crime at the exact same moment as the sleuth, and from the exact same pieces of evidence.  And it was exquisite.  There was true revelation with this one, as multiple seemingly innocent earlier scenes clicked into place neatly; that pause in reading accompanied by the epiphany that it all works together.  This was the full satisfaction of a denouement without even needing one.

Murder at Hazelmoor has a simple clever solution, and it’s the type that frustrates you that you didn’t think of it earlier.  But you wouldn’t have.  Even better may be the motive for the crime; so deliciously sitting in broad daylight, but presented in such a way that even if you expected the culprit, you wouldn’t have thought of that motive.

So, yeah, I got my British mystery, and it was satisfying.  Oddly, both Murder at Hazelmoor and Heads You Lose (my previous British read) are set in snow-swept winter landscapes, while I’m in the dead heat of summer.  So maybe put this on your list for a read around Christmas.

I’d love to claim that I purposely timed this review to coincide with the one from Laurie at Bedford Books, but it’s a complete coincidence that these came out on the same day.  You can read her take here.

An image of the table rapping is a nice touch for the cover of my Dell edition, selling the seance aspect which is ultimately underplayed in the story.  For the map on the back, the publishers chose a rendering of the small neighborhood surrounding Sittaford House.  There are a number of nice details that are true to the story – the order of the houses that everyone lives in, the path leading off to the moor, and even Sittaford Beacon – which help fill in aspects of the setting.

As is typical with paperbacks from this era, avoid reading the cast of characters and “what this mystery is about” sections at the front of the book prior to reading the story, as they reveal too many details; one of which will clue any regular Christie reader in to who the killer is. 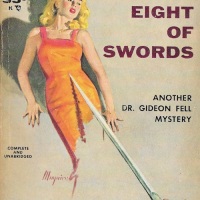 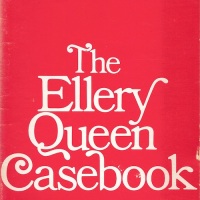