When I started my journey with Carr, the road was laid out and predictable.  I would read through a blend of the most highly regarded books before making my way into the middle ground – books you don’t hear too much about, but aren’t derided.  Eventually, I figured, I’d hit a breaking point – slogging through a few disinteresting stories and then moving on to a different author.  But, then a funny thing happened.  I accidentally read Fire, Burn (thinking it was The Burning Court), which, while not derided, doesn’t exactly inspire stellar reviews.  Shocked that I loved the book, I decided to step further into the deep end, next picking up Death Watch, which I’ve seen on a few “worst of Carr” lists.  Absolutely loving that story, I now find myself at grips with The Man Who Could Not Shudder.  While not despised at the same level as, say, Behind the Crimson Blind or The Hungry Goblin, this book is a staple when people list their least favorite Carr’s.

What led me to the book was a comment by JJ at The Invisible Event that there is a moment of brilliance – of sheer audacity on Carr’s part – when the solution is revealed.  Ok, I’m sold.  After experiencing a euphoric moment of clarity towards the end of The White Priory Murders, I had to have another taste.

The story is a bit slow to get started – you’re about 1/3 of the way through when you get to the crime of interest.  Before that, you have a reasonably enjoyable, yet drawn out, introduction to the premise and the key characters.  I got a bit of a sense of “great, another mansion floorpan I have to build in my head and seven character’s to fill out.”  Normally, this is part of the Carr fun, but without being invested in a stormer of a plot, much yet an impossible crime, it felt a bit tiring.

To be fair, there is a little to lure you in.  The plot revolves around a supposedly haunted house.  Centuries ago, the owner died under mysterious circumstances.  A more recent tragedy, 17 years back, involved a butler crushed to death by a chandelier.  What makes the accident so puzzling is that the victim was in his eighties, yet appears to have jumped from a chair up to the chandelier, where he swung vigorously until it dropped on top of him.

Although interesting, the theory behind the butler’s death is preposterous enough to where you don’t even entertain that is what really happened.  A similar issue occurs with the novel’s core murder.  A pistol in a mounted display jumps off the wall, hangs suspended in the air, and shoots a character in the head.  In both scenarios, your natural reaction is “well, obviously that isn’t what really happened”.  This is a bit of departure from the Carr that I’m used to.  Often, we’re treated to a scenario that, while impossible, seems entirely convincing.  In this case, I immediately rejected what is reported to have happened, just because it sounded so outlandish.

I’ve been a big fan of Carr books that lure you in with an intriguing premise – the secretive ritual in Hag’s Nook, the murder room in The Red Widow Murders – and so a haunted house sounded right up my alley.  Oddly though, Carr doesn’t lay on the atmosphere that you would associate with the previously mentioned works.  No claustrophobic air, no sense of dread…  Instead, we get people talking about the house being haunted, but no real feeling that it is haunted, and that almost feels intentional on the author’s part.  I see this as a missed opportunity, as the idea of the premise is really attractive to me and I would have liked to see what Carr could do with it if written in the style of one of his darker early works.

So, at this point, you’re thinking that I hated the book.  No, I’m just stating that it starts slowly and doesn’t play up to its potential with the haunted house angle.  Once the actual core murder occurs, the book becomes engaging and picks up a fine pace.  Fell appears to investigate and immediately sheds a light on the crime that shifts it from ridiculous to intriguing.  The plot becomes more engaging and the investigation picks up the pace quickly.  The final 2/3 of the story proceeds as I would expect/desire from a Carr work.

The end is a mixed back.  On one hand, there is an element of disappointment that I can’t get into without spoilers (more on that later).  On the other hand, you get Carr at his funniest.  A certain act by Fell, plus the reveal of the killer, are just hilarious, and I can’t imagine a reader not laughing.

If this is bottom of the pile Carr, then I’m loving life.  That means I have a lot of works to go that I’m going to enjoy.  Books that I had pushed towards the bottom of the pile – Seeing is Believing, Below Suspicion, Skeleton in the Clock, The Dead Man’s Knock – maybe these are books I’m really going to enjoy.  Don’t get me wrong, I can get why people frown on The Man Who Could Not Shudder (requires spoilers), but I’m fine with it.  I’m sure there is better material by other authors that I could be better tasked with reading, but I’m more than happy to read my way through this level of work.

This is the first of the Zebra Books printings of a Carr novel that I’ve owned, but I’ve seen that there are a whole series containing well drawn covers.  Of course, most mystery cover art has very little to do with the actual book, but these are intriguing on two counts.  First, they give you a glimpse of what the series detective looks like.  Second, they contain some aspects directly related to the plot.  This last point especially applies to The Man Who Could Not Shudder.  Some thoughts:

-The drawing of Dr Fell is far from what I feel is described in the books.  In the stories, he seems much heavier and more disheveled.

-The head of Fell’s cane should be shaped like a crutch, rather than a typical curved cane.

-The pistols above the fireplace were supported on three pegs in the book, not the two shown in the picture (and this is a significant detail).

-The triptych was not on the same wall as the pistols.

I can guess a few reasons why people criticize the book:

Despite all this, I enjoyed the book.  Maybe I’m too invested in Carr to where I’m willing to look the other way.  Perhaps its like that band that released three stunning albums early in their career, and you find yourself listening to their later albums, even though you would have never bothered to start with them.  If so, I’m fine with that.  Reading, like listening to music, is about the enjoyment and the state it puts you in.  Maybe we make excuses for our idols, but if you’re having fun…

24 thoughts on “The Man Who Could Not Shudder” 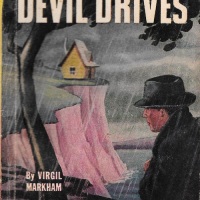 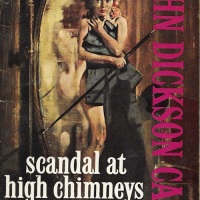